Published by Nickajay on November 1, 2019

You won’t have to spend a fortune to get your hands on a smartphone today. For as low as $100, you can buy a decent device. The specs to price ratio has been increased to a level that we haven’t seen before.

When we talk about value for money, it is a crime not to include Xiaomi in the discussion. The company put haters of Chinese products into shame by offering loads of specifications at impressive pricing. And, we now have Realme following the same trend.

Released on 22 February 2018, Redmi Note 5 and Note 5 Pro achieved the feat of producing the biggest sale in the Indian history by selling more than 300,000 units within three minutes. People were going gaga over the smartphone then.

Fast forward to today, we went past two generations to have Note 8 series. However, there are millions who still cherish their Note 5 Pro units. They received Android Pie update about five months ago. The last firmware overhaul the device got was August security patch. 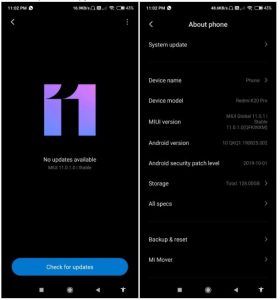 Now, the table has been turned in the favour of Redmi Note 5 Pro. Xiaomi has rolled out MIUI 11 for the device with some significant features. Unfortunate for the users that they are not getting Android 10. Have a look at the changelog below. As you read, the package brings with it the October security patch. The OTA notifications started going out today only. So, you may have to wait for a day or two to get them to your screen. In case you are running Global Stable build, you can manually flash using the update package.

How To Enable Nearby In Android

Recently google announced Nearby share for Android devices, just like IOS airdrop feature. This Feature will help android user to share files to nearby devices. This feature is right now in beta testing and is Read more…

How To Unbrick OnePlus 6/6T

Have you accidentally hard bricked your OnePlus 6 or OnePlus 6T? Then don’t worry, we are here to help you recover it. We will guide you on how to unbrick OnePlus 6/6T using the MSMDownload Read more…

How to Install MIUI12 on Redmi Note 5 Pro

Hi, Everyone As we all know that Miui has strated pushing out Miui12 for their phones. Stable version is already released for their flagship devices and other are yet to recieve it in batches but Read more…